EP 55: Cancer, Chemo, and a Quest to Disrupt Clinical Trials

Ping Yeh, co-founder of StemoniX, took notes on the ineffectiveness of therapeutic clinical trials while undergoing chemotherapy treatment. When he emerged cancer-free, he took on a new challenge. 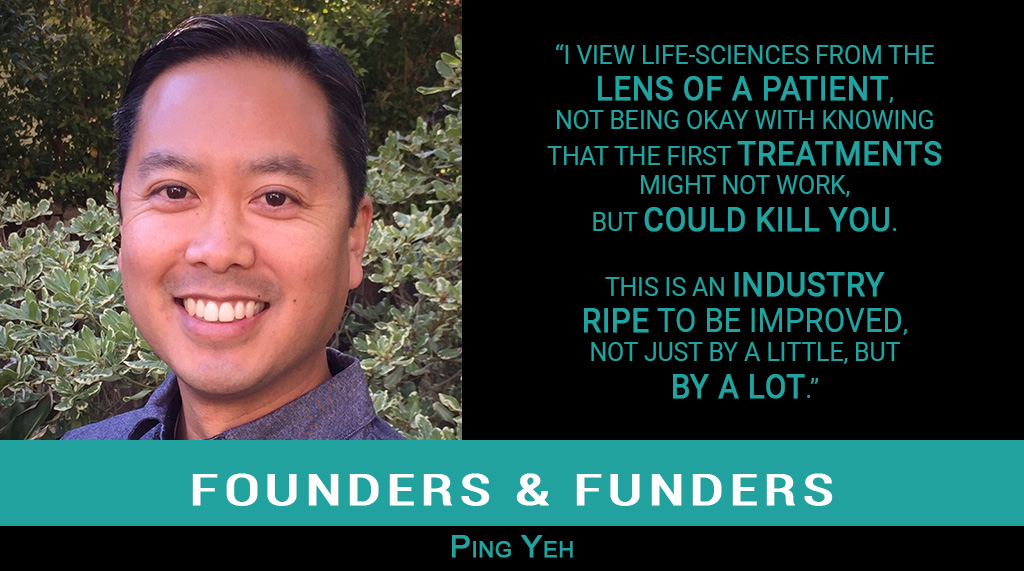 After enduring several failed rounds of chemotherapy, Ping Yeh, who suffered from Hodgkin’s lymphoma, learned something that would both save his life and change the trajectory of his career.

“The first treatments of chemotherapy actually didn’t work,” Yeh recently shared on Founders & Funders. “I was resistant. I did eight rounds and got the toxicity without much of the efficacy. Then they switched me to a more potent version—German chemo. I smile at that because I didn’t know, at the time, that different ethnicities respond to drugs differently, but that’s actually the case.”

The change worked. Yeh’s body responded to the new drug and, over time, he went into remission. The discovery, however, did not go away.

“How are clinical trials designed?” he asked himself. “Do we have a diverse-enough sample size to get the right drugs to the right people?”

Six years later, Yeh is the co-founder of StemoniX, a biotech company that leverages skin cells to design micro-organs—think thousands of tiny brains or tiny hearts. The result can be used to test different drugs or therapeutics to see if the drugs are safe and if they effectively address various diseases.

Ping Yeh is Co-founder and CEO of StemoniX, a biotech startup that makes human microOrgans® like microBrains and microHearts from skin or blood to discover new therapeutics to treat diseases and pandemics such as Epilepsy, Alzheimer’s, Rett Syndrome, Diabetes, Ebola, and Zika. StemoniX was the 2016 Minnesota Cup Grand Prize Winner and a 2017 Red Herring Global 100, which highlights the 100 most innovative companies in the world. StemoniX was born from Ping’s experience as a cancer survivor, which inspired him to build a world-class team to address the challenges of drug discovery and personalized medicine.

Yeh received his BS and MS in mechanical engineering with an emphasis in nanotechnology from UC San Diego and an MBA from the University of Minnesota’s Carlson School. Yeh also has certifications in Mergers & Acquisitions (Kellogg), Program and Project Management (PMP, PgMP), and Innovation Architecture. Ping serves on the Alumni Board of Directors at UC San Diego.

StemoniX is a portfolio company of Bascom Ventures and Chestnut Street Ventures.