Change the World: The Future of Video Games

Please join us for a discussion with John Linden, Founder & CEO and Andre Johnson, VP of Business Development of Mythical Games. This Castor Ventures portfolio company is a next-generation game technology studio creating universal digital economies driven by player ownership. They have been acknowledged by Forbes as one of the Disruptive Technology Companies To Watch in 2019. Led by gaming industry veterans, the team has helped develop major franchises including Call of Duty, World of Warcraft, Guitar Hero, DJ Hero, Marvel Strike Force, Skylanders, and The Walking Dead.

The studio’s first flagship game is Blankos Block Party, an open-world multiplayer game with a focus on player-designed levels, styled like a giant block party for digital vinyl toys, and built on the Mythical platform. This first game showcases Mythical’s vision of player-owned economies by enabling a gaming ecosystem that brings players, creators, brands, and game developers together through personalized experiences and content.

John Linden is the Founder & CEO of Mythical. Prior to Mythical, John was the President of Seismic Games (acquired by Niantic Labs), developer of Marvel Strike Force and Magic the Gathering: Valor’s Reach. Prior to Seismic Games, he was a Studio Head at Activision Blizzard on the Call of Duty and Skylanders franchises. Before the games industry, John was the Co-Founder / CTO at Adknowledge and at OpenX and built his own startups, Planet Alumni (acquired by Reunion.com) and Litmus Media (acquired by Think Partnership). John is passionate about video games, the future of blockchain technologies and bringing emerging technologies to the mass market.

Andre Johnson is Vice President of Business Development at Mythical Games. With 15 years of success across the entertainment industry, with a focus on new media and first-of-its-kind content, Andre has co-founded several personal projects and advised on the creation and development of startup entities including Calvin Labs, MOV, and SimWin Sports. Previously, Andre was a founding member of The Virtual Reality Company team where he served as VP of Business Development as they created and launched the industry’s first augmented reality dragon, and the Jurassic World VR Expedition currently available in Dave & Busters’ across the country. Andre is married with two children and remains sane by gaming and enjoying a glass of wine in a fresh pair of new Jordan’s. 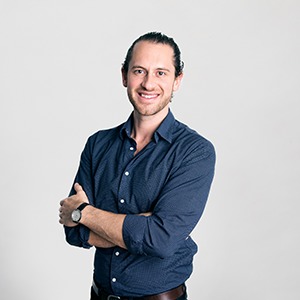 Cainon has a background in finance and entrepreneurship. At Boston Consulting Group, he conducted due diligence across the semiconductor, transportation, and medical device industries. At PBM, a $500M healthcare-focused VC firm, he led the due diligence process and worked as an operating partner within portfolio companies. He is also an active angel investor in several MIT startups. In addition, Cainon co-founded University Laundry, which was acquired by a national operator and would be sold to Proctor & Gamble’s marquee Tide brand. He has an MBA from MIT’s Sloan School of Management, and a BS from the University of Virginia in Systems and Information Engineering.