The Northwestern grad ('04), Purple Arch investor, and Investment Committee member discusses the books, people, and ideas that drive his vision. 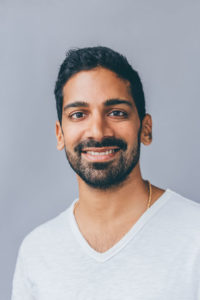 “The rules of this world were effectively ‘invented,'” he says in the Q&A below, “and there’s an opportunity to create your own rules. It’s incredibly liberating, and it’s what drives me.”

Not long after Raaja returned from his time abroad, he co-founded Bucketfeet, and over the next seven years his team built a community of 45K shoe-designing artists in 120 countries, sold those shoes in 20+ countries, and opened 10+ retail stores and pop-up shops. They also launched the first made-to-order, on-demand footwear manufacturing and supply chain model.

No wonder Bucketfeet attracted $20M in venture capital funding, including investment from Adidas, before the company was acquired by Threadless in 2017.

Below, Raaja tells us more of his story and what inspires him, as well as how he landed in his current, multi-faceted role as an eCommerce advisor and business-builder.

How did you get involved with Purple Arch Ventures? What drew you to become an IC member and investor?

David Beazley and I connected a year and a half ago or so, and have kept in touch ever since. I began to learn more about Purple Arch and also became a more active angel investor over the last year. I’ve been wanting to get more involved with the Northwestern community and saw this as a great opportunity to do so. Launching a fund is also something I’ve thought about for the future, so I figured this was a great way to combine both of those interests.

Your company, Bucketfeet, was acquired by Threadless in October 2017. What led to this event and what did you learn from it?

It was a long, up and down journey, from my co-founder Aaron Firestein and I moving back to the US in 2010 to begin work on the concept to launching the business in 2011. We ended up hiring an investment bank in late 2016 to explore opportunities and decided Threadless was the best outcome. So much has changed in eCommerce over the past nine years and the pace of change continues to get faster and opportunities come as fast as they go.

What’s your current role and what keeps you busy these days? What draws you to this type of work?

My current role is Co-Founder of Rogue Trading Company, the parent company to Rogue Advising, MarketerHire, and Rogue Brands. My new partner, Chris Toy, and I built this holding company to launch, incubate, and invest in businesses that have fundamental competitive advantages. We also get to partner with world-class entrepreneurs and operators. I love constantly working on new projects (sort of like a VC), getting my hands dirty (like an operator), and meeting new people every single day (a personal passion). I’m also really enjoying building capital-efficient businesses that can scale like a venture-backed business, as well as focusing on the singularity between consumer preferences/supply and how marketing influences those preferences.

What sparked your entrepreneurial drive? How do you sustain it?

I think the “always an entrepreneur” stories are more correlation than causation. For me, it was really 18-month solo backpacking trip I took around the world in 2008 and 2009. Although it’s an obvious fact that people around the world (and in the US) live very differently and do many different things, and can be happy, it’s a different thing to interact with lots of very different people in impactful ways. In a nutshell, I realized that the concept of risk-taking for most of my peers and quite frankly for a significant part of the population of a first world country (although not all) is extremely misguided. The rules of this world were effectively “invented” and there’s an opportunity to create your own rules. It’s incredibly liberating, and it’s what drives me.

What are the most important lessons you’ve learned on your entrepreneurial journey?

One of the most important lessons I’ve learned is that failure is part of the process. When we learn how to ride a bike as kids, almost 100% of us fail. Our parents don’t scold us or tell us to never try riding a bike again. Of course we fall off — we’ve never tried riding a bike before. They tell us to get back up and practice until we get good at it. What most people don’t realize is that we’re not supposed to be really good at something the first time we try it. Entrepreneurship is no different. That lesson was a major life unlock for me.

Which resources or sources of inspiration are most useful to you on a regular basis?

I read a lot of books about history, philosophy, business, and people. I get my best ideas and most tightly held beliefs from books which inspire me to think differently and more deeply about things that matter. A recent book that was really inspiring was “Leonardo Da Vinci” by Walter Isaacson. Leonardo was a genius, of course, but he was also self-taught and honed his talents with an obsessive curiosity. It’s amazing how quickly we lose our childhood imagination, which can be such a powerful force for driving us forward.

What do you find most inspiring about being part of Northwestern’s entrepreneurial ecosystem?

I love that I can pay it forward. I have gotten an incredible amount of help from amazing people my whole life. I think it’s our duty to support each other and the communities we belong to. I’m excited to be a bigger part of Northwestern’s community in a way that I wasn’t before.

Purple Arch Ventures is a private, for-profit fund that’s unaffiliated with Northwestern University. PAV provides Northwestern alumni investors with a diverse portfolio of 20–30 deals, many of which are connected to fellow alums. To learn more, listen to a podcast episode with PAV’s Managing Partner, David Beazley.