When Porter Braswell heard his father deliver the tough love message that Porter would never play in the NBA, this eventual entrepreneur shifted his focus from having a basketball career to getting the best education possible. After a few years of working on Wall Street, something didn’t feel right. Learn more about this Yale alum and the genesis of Jopwell, the company he co-founded. (Listen) 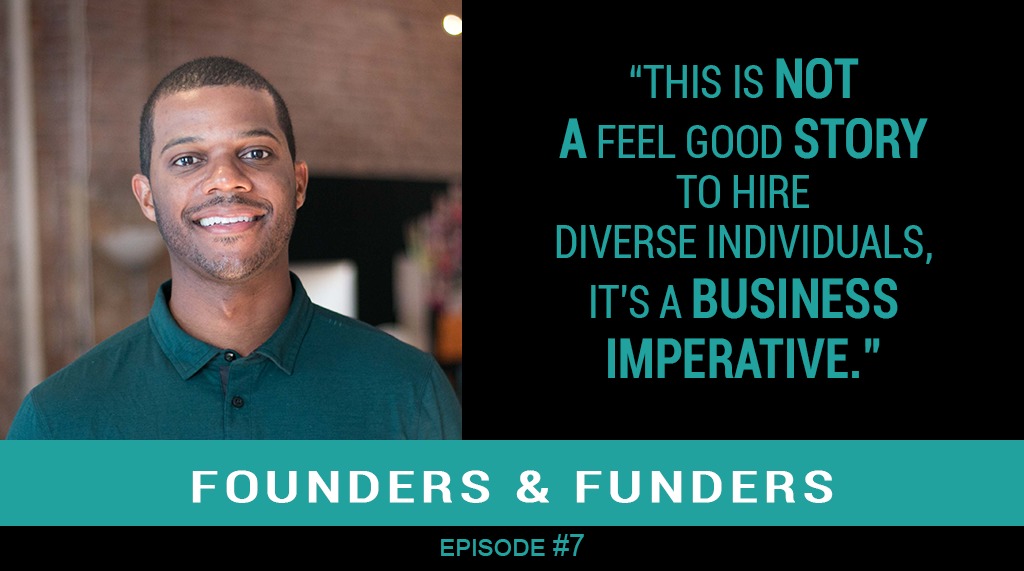 Episode Summary: Porter Braswell, a 2011 graduate of Yale University, shares his story of how he switched from being a top-level basketball player to happily working on Wall Street. But when his employer continually asked him to help recruit people who “looked like him,” Porter and a co-worker decided to leave the company to create a career platform that would give under-served minorities equal access to job opportunities. Two years after its launch, Jopwell was listed as one of Fast Company’s “Most Innovative Companies” and one of Entrepreneur’s “100 Most Brilliant Companies” in 2017.

One participant in Jopwell’s Series A round in 2017 was Blue Ivy Ventures, a venture capital fund created by Alumni Ventures Group for Yale alumni founders, venture capital investors, and other Yale-connected individuals. In this podcast, you’ll learn more about the genesis of Jopwell, plus why this young co-founder invited Blue Ivy into the deal.

Porter Braswell and co-founder Ryan Williams came up with the idea for Jopwell while working on Wall Street. Often called upon to recruit other candidates who “looked like them,” Porter and Ryan knew that here had to be a better way to attract top talent at scale, while building a diverse professional community.

In 2015, they left finance to launch Jopwell, a career platform that helps Black, Latino/Hispanic, and Native American students and professionals unlock opportunities for career advancement—not only when seeking a job but at all career stages. Since then, Jopwell has grown into an essential resource that has facilitated thousands of connections between its community and partner employers.

Blue Ivy Ventures participated in Jopwell’s $7.5 million Series A round in September 2017. A pre-existing investor, Cue Ball Capital, led the round, which also included returning investors Kapor Capital, Y Combinator, Omidyar Network, and Valar Ventures. In addition to Blue Ivy Ventures, other new investors in the round included SJF Ventures and Teneo Ventures. The round brought Jopwell’s total funding to date to $11.75 million.

Jopwell initially made it onto Blue Ivy’s screen because Porter earned his degree in Political Science from Yale University, where he also played varsity basketball for four years.

As a graduating high school basketball player, Porter had many scholarship offers to play ball in college. But his dad pulled him aside and said he was too short to play in the NBA. He suggested that instead, Porter should pick a school that would give him the best education possible. Porter chose Yale. And though basketball continued to be a big part of his life, this young man had other aspirations. He says, “I was a student first, athlete second, and over the summers I kept up with my peers and interned in amazing industries.”

Despite his education and summer internships (which should have qualified him for many professional opportunities), Porter realized that the job offers he received came primarily through diversity programs. In comparing his experiences to that of his scholastic peers, he recognized that many of his friends had gotten jobs based on personal connections. Porter didn’t have a network like that, nor did the other men and women of color he knew.

These conversations led to the epiphany that non-diverse leadership within a company robs the business of increasing their diversity naturally, forcing them instead to create some type of initiative or outreach program. That didn’t sit right with Porter. Along with his co-founder, Porter thought of a way to change the system.

As you listen to this podcast, here are three things you will learn about Porter Braswell’s journey to success:

1. Leverage the brands of early adopters

Prior to building the Jopwell platform, Porter and Ryan took their idea to potential businesses. In doing so, they quickly discovered that many companies already understood the need to hire more under-represented minority professionals. Without a tool to demonstrate the proposed solution, however, the meetings focused on the pair’s pitch deck and their enthusiasm for the solution.

Since the Jopwell platform did not exist, the co-founders could not close the sale. But they left with something more valuable—permission to use high-profile company logos as part of their launch. This buy-in gave the team credibility in getting friends and family members to fund the initial development of the Jopwell technology.

2. Raise outside capital for the right reasons

Though other founders, Porter says, “treat funding as some form of feather in your cap, a sign that you’re doing well,” he thinks that you should build a healthy business first and raise outside capital solely as a function of growing the business as needed. Porter shares his take on when outside investment makes sense.

In choosing investors, Porter strategically picks funders that he and his partner want to be part of the Jopwell journey. “It’s not just a checkbook,” he says. The team puts serious thought into whom they will allow into the family. Jopwell was excited to work with Blue Ivy in their Series A round because of the Yale connection and shared background. Porter also noted that Blue Ivy understood and believed in Jopwell’s mission.

Though Jopwell started out as a hiring platform, the business is evolving into a truly holistic diversity solution for organizations of all sizes. The company is now providing an expanding set of resources for career development, retention, inclusion, and a number of other issues to address the needs of candidates and companies.

This podcast is worth a listen if you’re interested in learning more about diversity hiring or about how this Yale grad is making businesses better.

If you want insights into how Yale alumni are investing together, sign up for the Blue Ivy Ventures fund newsletter. You may also want to sign up for the Alumni Ventures Group newsletter to learn more about all of the alumni and special-interest funds at the company.

Follow Porter and Ryan at Jopwell or Porter Braswell on LinkedIn.

Founders and Funders is a podcast where we discuss how entrepreneurs and investors work together to build great new companies. Our guests—many of whom are connected with AVG as entrepreneurs, investors, managing partners, fellows, and more—are invited here to talk about the journey of building companies from incubation to early stage investing and beyond.

Axiom Space: Building a Space Station Out of This World