Putting Money in the Mattress


Doorway to a Deal

Connecting with classmates or fellow alums remains a unique conversation starter rooted in a shared sense of community. This feeling also applies to entrepreneurs and venture capitalists, especially at top schools with close-knit entrepreneurial communities. Alumni-connected entrepreneurs occupy a significant share of the startup ecosystem supported by leading VCs. About 90% of companies with investments from top-decile VCs are linked to a leading university, including all eight Ivy League schools. 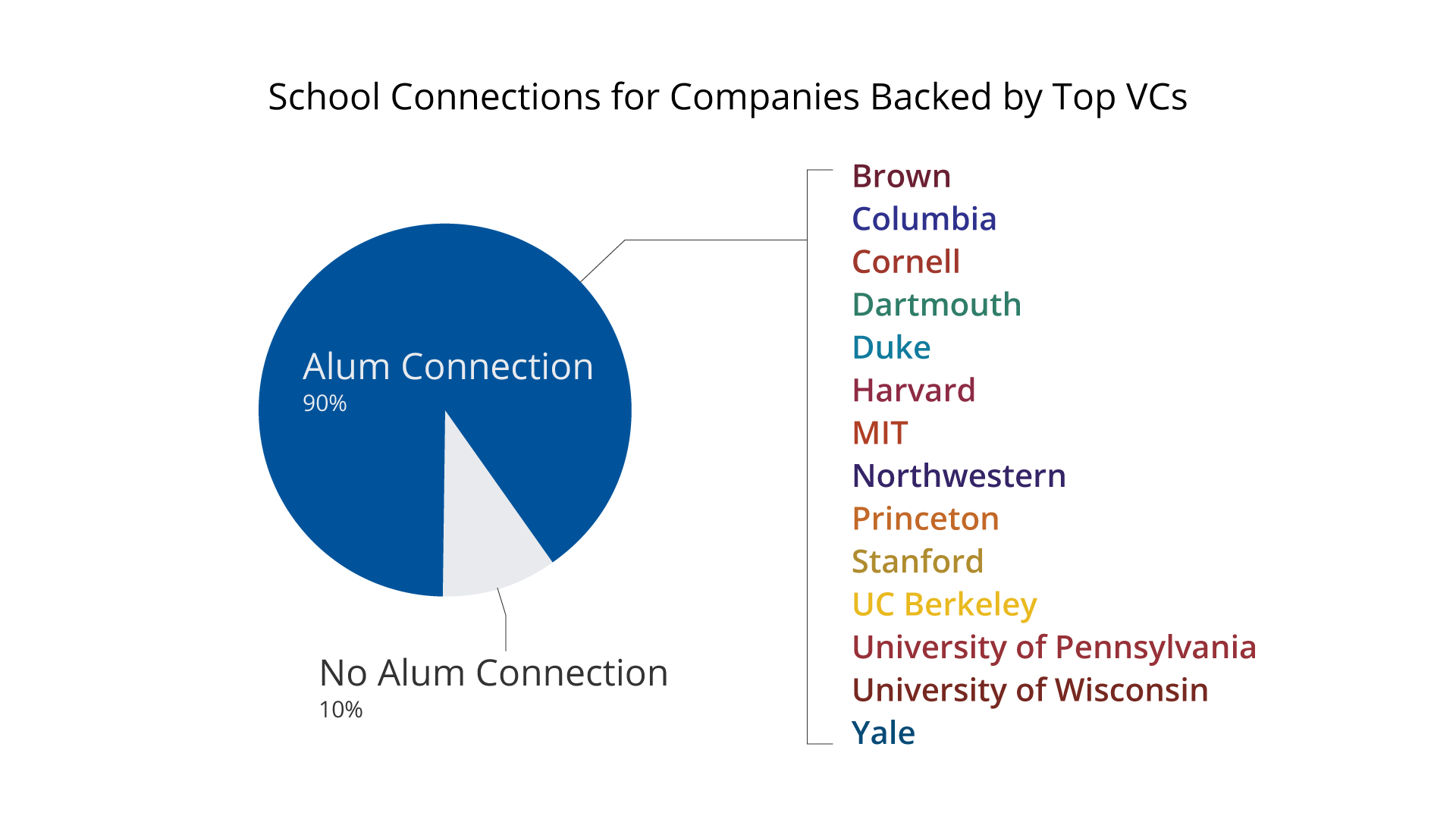 Having a built-in networking tool with fellow alums can offer a unique gateway into leading investment opportunities. Typically, VCs find promising deals through their colleagues in the industry, whom they’re competing against for a seat at the table.  VCs with an alumni focus instead source deals with top startups from established relationships with classmates and fellow alums.

“Leveraging alumni networks allows investors to gain access to deals that most other VCs cannot,” said Andy Ervin, VP of Investment Operations at Alumni Ventures Group. “A Managing Partner who’s tied into their alumni network will know the right people to be able to access the best deals from their community.”

Alumni-oriented investors can also circumvent typical VC roadblocks with a low-friction diligence process, forgoing negotiation or board seats for access to an investment. An alumni connection between a VC and entrepreneur can also lower the capital requirements to make an investment.

“You can only take a small portion of the deal by not competing with the other VCs, who need to write large checks,” said Ervin.

With reduced investment barriers, VCs can instead focus on developing value-added services for portfolio companies, namely their alumni network. The process of investing through alumni relationships naturally cultivates a community of people from prestigious schools working in a variety of industries. VCs can offer potential portfolio companies access to this web of elite human capital.

“The alumni connection is a door opener that ensures we can talk to a founder,” said Ludwig Pierre Schulze, Managing Partner of Waterman Ventures, a fund for Brown alums. “Then, it’s all about how you invest and the value you can contribute to potential portfolio companies.”

The Alumni Approach in Action

An alumni connection was instrumental in Waterman’s deal with e-commerce giant Casper. Since launching in 2014, the company has grown its mail-order mattress business into a line of high-quality sleep products available online and in over 1,000 stores nationwide.

“Casper has revolutionized an old-school industry and changed mattress retail forever,” said Schulze. “In just five years, Casper went from an idea to being a unicorn valued at >$1B.”

According to Schulze, Waterman’s investment in Casper “wouldn’t have happened” without an alumni connection with Casper Co-Founder Neil Parikh. Fellow Brown alum and Virgin Pulse President Rajiv Kumar introduced Parikh to Schulze at a dinner for potential investors hosted by Waterman.

Parikh met with Schulze after the event to discuss Waterman’s investment process and connection to Alumni Ventures Group’s network of 300K+ alumni. After securing a deal, Casper gained access to a pipeline of potential employees, partners, and/or customers, all graduates from Ivy League schools and other top universities. In turn, Waterman invested in a fast-growing industry leader alongside chief investor New Enterprise Associates (Uber, Salesforce, Groupon).

“The mutual opportunity was clear,” said Schulze. “Waterman could bring much more than just money to Casper and in-turn get access to a late-stage deal.”

The mutual opportunity stemming from this relationship extended to other Alumni Ventures Groups funds, who were able to access the deal via Waterman’s alumni connection with Casper. Deal sharing is a common practice within AVG, as one managing partner’s relationship with a portfolio company can be leveraged by 14 alumni-focused funds with their own unique communities.

With investments from Chestnut Street Ventures (for UPenn alums), Fission Ventures (for Columbia alums), and Strawberry Creek Ventures (for UC Berkeley alums), Casper linked itself to a broader network of professionals who attended top tier universities.

Use code CasperAVG15 for 15% off a Casper or Wave mattress until June 30.

In this video, the Basecamp team discusses how they collaborate with and complement each other,...

What Forms Should I Expect Come Tax Time?